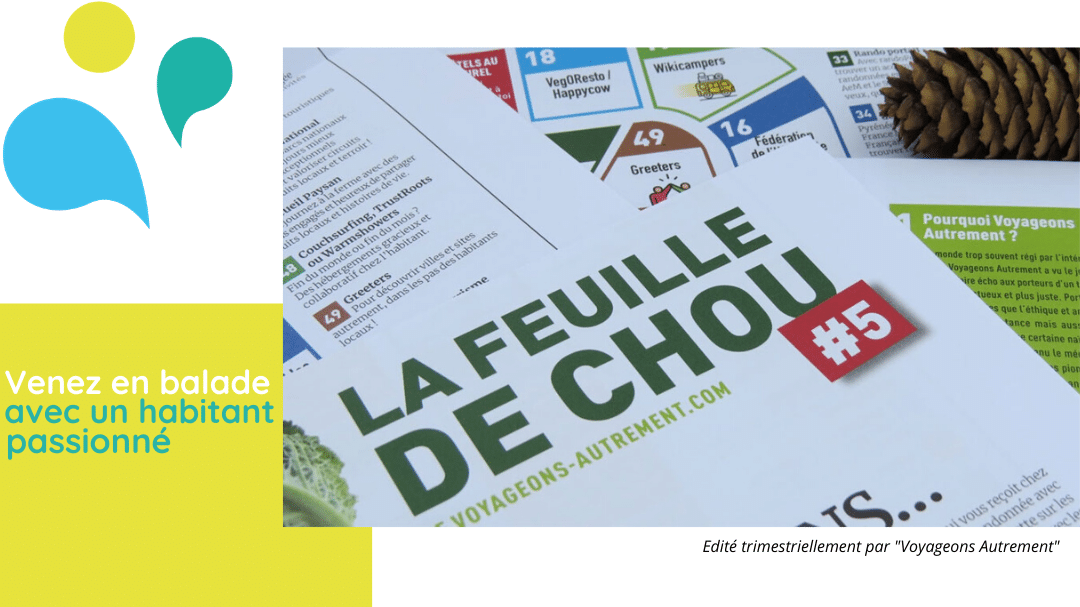 – A collective of journalists who give information to prepare his trip! Articles and dossiers, resources and information on Sustainable Tourism, Ecotourism, Fair and Solidarity Tourism, etc.
– Generalists and territories under the magnifying glass. A popularisation of the sustainable development policy of the major operators (technical data sheet, evaluation of actions, etc.).
– Games and fun operations to raise awareness
– Spaces for participation and exchange
– The portal Voyageons-Autrement.com was ten years old in 2018, ten years and the desire to bring together in one work a fundamental work done day after day since 2008.
– Since April 2019, the portal publishes a free quarterly : La Feuille de Chou! The magazine is an 8-page magazine distributed free of charge throughout France with more than 30,000 copies each quarter.

While the collective of journalists “Voyageons Autrement” (VA) seeks to perpetuate the next 4 issues of its paper magazine ‘La Feuille de Chou’ through a participatory fundraising campaign, the France Greeters Federation (FFG) wanted to support it.

A sustainable relationship based on the human and the drive…like the Tourism we stand for!

Already in 2009, Voyageons Autrement published on its platform a “Greeters Dossier” with a series of articles describing the arrival of the greeters phenomenon in France, first in Nantes, Paris, Lyon, Marseille and in the Pas de Calais. At the time there were only 15 destinations in the world offering this form of participative tourism… today there are nearly 100 destinations in France alone!
The Voyageons Autrement team has always been attentive to each of the stages we have gone through. While a lot of the media were still won over by the concept of free walks with locals, the articles of Voyageons Autrement asked the right questions, the ones about sustainable tourism, where the locals have a place in their own right. To write in 2009 that there were as many ways to discover a city as there were inhabitants was premonitory!

An idealistic spirit but a very real promotion

If Voyageons Autrement seeks to highlight a multitude of inspiring initiatives around values that are close to us, it is not only out of friendship that we collaborate with Voyageons Autrement. Whether for the book “10 years of Sustainable Tourism”, the “Feuille de Chou”, the directory or the articles and publications on social networks, each publication on these media has enabled us to reach an audience of tens of thousands of qualified people interested in the theme of sustainable tourism.

We had the good surprise to learn that we were present in the game of the duck goose (central notebook) of the cabbage leaf N°5! While having fun, you will be able to discover a fantastic network of actors just a stone’s throw from your home! As we are (almost) everywhere in France, don’t hesitate to come and meet us this summer.
And as we are convinced that greeters are part of tomorrow’s tourism, expect to hear from us soon! Come on, just a little more effort, there are still a few days left to allow them to reach the second level of their participative campaign and to perpetuate the next 4 issues of La Feuille de Chou! Click here >