THE FLOWERY HILLSIDES OF SAINT CLOUD

A greeter will tell you the story of the district separated into four distinct parts with different destinies: that of the bourgeoisie who admires the views and perspectives on the Bois de Boulogne and Paris, that of the working-class population who live on the banks of the Seine, that founder of the Dassault aeronautics and that of the resort subdivision.

ON THE TRACES OF ALBERTO SANTOS DUMONT AND MARIE MARVINGT

One has been retained by history, the other is almost ignored. And yet both flew over the sky of the Parc des Coteaux de Saint Cloud in the early 20th century.
Born almost the same year (1875), they will all have 2, child, driven a locomotive and by 1900 a car, had the same size, flew in a spherical balloon, escaped certain death, will be famous and known in the 1910s, will be elevated to the rank of officers of the Legion of Honor.
But for one the story will stop at the beginning of the Great War while for the other, it will be an opportunity for an additional celebrity. And yet the great History will remember Santos-Dumont and his feat of 1901 and ignore Marie Marvingt and her sporting prowess. Why did she hold the life of a man to that of a woman, that of the “flying Brazilian” to that of the “Fiancée of Danger”?
Discover in 7 stages the history of the Coteaux district through the evocation of the life of these two characters 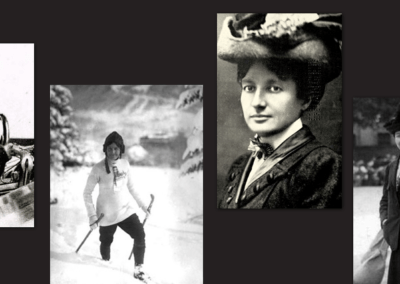